What is Wing Chun Kung Fu?

Wing Chun is a martial art that originates from Southern China. Unlike other martial arts Wing Chun kung fu puts function ahead of form. Wing Chun is one of the few martial arts that hasn’t been converted into a sport or watered down into a health exercise, instead it has undergone a continuous evolution as a street practical martial art ideal for self defence. 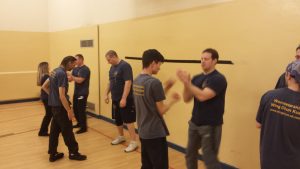 Unique in its simplicity, Wing Chun doesn’t have flashy jumping or spinning kicks, there are no complicated locks and throws and absolutely no mythical “dim mak” pressure point voodoo.

Wing Chun is a martial art based upon striking, designed for fighting in close range. Designed to allow a smaller person to overcome a much larger opponent Wing Chun relies on posture to give structural strength and speed to give impact to strikes. Famous for its chain punching, Wing Chun kung fu doesn’t rely on a one hit one kill type approach that puts all of your proverbial eggs in one basket. Instead Wing Chun employs multiple rapid strikes aimed at vulnerable spots to overwhelm an opponent.